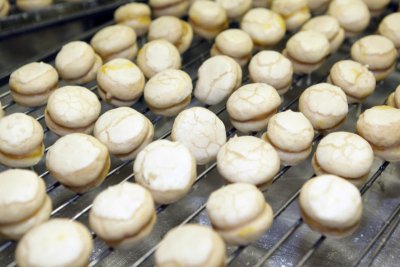 The cake shops Larrañaga, Mujika and Raizabal, which are over a hundred years old, maintain the local baking tradition with their famous handmade tostones (cookies) and rellenos (fillings).

There are numerous theories about the origin of these delicious sweets, but the only thing we do know is that several families in Bergara’s old quarter maintain this tradition after more than a hundred years, and that Bergara’s Tostones and Rellenos are still very much in fashion and extremely popular.

The Bergara bizcocho consists of two layers of sponge cake with a filling in the middle made of egg yolks and sugar.

All the egg whites that were left over were then used to make a meringue, with added flour and sprinkled with crushed almonds, which was then baked in a low oven, with the ‘leftovers’ of the filling being used to make the cookie called a tostón.

You simply have to try these delights.

These sweets are still being baked locally in three-hundred-year-old ovens in three traditional cake shops.

More recently, and to mark the town’s 750th anniversary, the major development has been the creation of a new dessert based on these fillings called Wolfram Goxua, to commemorate the separation of Tungsten/Wolfram by the local Elhuyar brothers. This patisserie is now on sale in shops.

Atala:
Proposamenak (behe aldean)
‹ The Embrace of Vergara up Two routes through the history and monuments of Bergara ›