3. Bergara, crucible of new ideas during the modern age

Bergara held a corn market three times a week, attracting crowds of people and giving rise to numerous contracts and business agreements. This meant the town required a certain level of infrastructure in terms of roads and accommodation, which explains the presence of numerous hostels and inns. 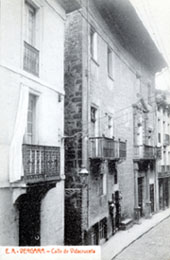 Besides this commercial trade, workshops sprang up dedicated mainly to metalwork: The blacksmiths’ forges received the iron ore transformed into ingots, and they used this raw material to fashion hoes, cutlasses, etc.; cutlers worked on making knives and created their own guild; and there were also craftsman dedicated to making firearms within the weapon-making tradition in the Deba Valley. Civil architecture developed because nobles, rich merchants and military personnel and public servants built or refurbished their homes, such as those in Ondarza and Eguino-Mallea. Religious edifices were also built;

in 1565, Andrés Martínez de Ondarza and Magdalena Araoz restored the Convent of the Santísima Trinidad, located in Goenkalea Street, and the end of the century witnessed the building of the Jesuits’ School in what is now the square Plaza San Martín de Agirre.

These transformations continued in the 17th century:

In 1629, the municipal boundaries were redrawn following the de-annexation of Antzuola. A similar attempt by the parish of Oxirondo was unsuccessful, whereby it continued to be part of the town.

Bergara was renowned in the 18th century above all because of its centres of learning.  The chairs of Chemistry and Mineralogy set up attracted leading scientists, such as Proust and Chabaneau. The quality and high level of the teaching filled the classrooms with students from all over the world. 1799 also saw the founding of the girls’ school Colegio de la Compañía de María, located on the Paseo del Espolón.

The province’s growing communication needs in the 18th century led to the start of building work on the Camino Real de Coches – The Royal Highway, which linked Alava to France, and passed through Bergara.